Scuba Diving in Ireland, more specifically the South Cork Coast is a must, because here are some of the best dive sites in the World. Within a short boat spin there are several wonderful dive sites full of life and suitable for all diving experience levels.

Because of the warming influence of the Gulf Stream the diving along the south coast of Ireland is unique. Many fish migrate along the Cork coast in the spring and summer time including Basking Sharks, giant Barrel Jellyfish (these Jellyfish feed on plankton and so are harmless to divers) and Mola Mola (sunfish).

Diving in Cork you are likely to see fish that are supposed to live in much warmer seas for example the Red (Portuguese) Blenny and Trigger fish. Of course diving in Ireland we have all the usual “Irish” fish as well.

The Ling Rocks are located 9km South-South East of Kinsale, Co Cork. The rocks are not exposed on the surface, rising from the sea bed the shallowest point is at about 22M at Low Water . The Depths around the rocks go down to 70M.

A GPS mark is required to locate the rocks and diving at “The Lings” must be undertaken at slack water. Because we are offshore we always drop a shot line. It may or may not be necessary to reel off the shot depending on visibility and the distance you wish to travel on your dive. There is actually no need to move at all as there is an abundance of life everywhere.

Because of the offshore location, depth and possibility of some current this is a dive for the experienced diver, but one that holds many rewards.

The colours of the anemone encrusted walls include all points of the colour wheel. There are several different types of anemones here, from jewels, dahlias, plumose and many more. There are bigger creatures living here too including various creepy crawlies in the form of lobster, cray, squat lobster, brown crab and spider crab to mention a few. Sizable conger eels lurk in the many crevices in the rock. All around the rocks there are shoals of fish – whiting, hake, pollack, wrasse and of course it’s not called the ling rocks for nothing because lings are present here too.

The Ling rocks is a fantastic scenic dive and is right up there among the must do dives, in your diving in Ireland schedule.

These islands are little more than very large rocks and are located much closer inshore they are only a very short boat spin from Kinsale. There are two Islands the Big and Small Sovereign. The big Sovereign is a sea bird sanctuary and many sea birds nest on the rock. Diving at the Sovereigns is suitable for all grades of divers

On the South side of the Big Sovereign is the remains of a Dutch trawler “The Nellie” which is in about 15M. The anchor of the Nellie was raised by some local divers a number of years ago and now stands at the top of the slip in Oysterhaven. The Nellie is a lovely dive to potter around and is a wreck dive that can be enjoyed by divers of all grades. There is an abundance of life on and around the wreck including many curious blennies. 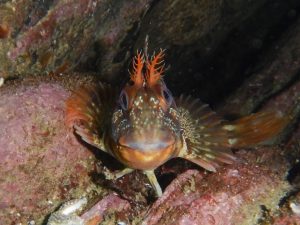 The nicest dive on the small Sovereign has to be the Grotto which is located at the Eastern end. This takes a bit of finding, but once found it makes for a sweet dive. There are amazingly coloured jewel anemones lining the walls at the entrance to the Grotto.  It is possible to  swim from one end and out the other. Around the Sovereigns depths are approximately 12-15m

Black Head is the headland inside the Old Head of Kinsale. Maximum Diving Depths here are 15M but the best of the diving is in approximately 13M. The Ground is a mixture of rocky reef and sandy gullies. This is a great sight to spot Angler (monk) fish, In the Spring time it is possible to see lump suckers here guarding their eggs. Every rock crevice is home to a little critter, some like the lobsters and congers are not so little. There is always something different to be seen here and the site is a Mecca for the macro photographer. 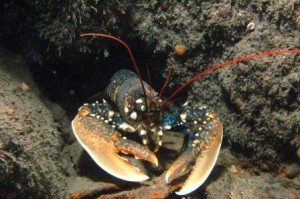 This is one of the best dives at Black Head. The dive site is divided between narrow passages that open into wider bowl shapes gullies. The walls of the gullies are carpeted with life, in the spring and early summer, in particular, they are covered with Oaten Pipe Hydroids which in turn are home to many nudibranchs and offer great photographic opportunities for the major photographer.  There are some beautiful walls of fuel anemones sporting large blocks of all colour varieties. There is larger life here too and you can expect to see Lobster, crabs, cray and many species of fish.

Heading west from Black Head just inside the Old Head of Kinsale is Bream Rock. Bream Rock is a reef starting at 8M going down to 25M. A strong current runs here so this site is best dived at slack water. Because of the strong currents, the reef is a wash of colour with many different types of anemones. All the usual suspects can be spotted here lobsters, congers crabs and in the Spring time lump suckers are often seen guarding their eggs.

The City of  Chicago

The Wreck of the City of Chicago lies on the Western Side of the Old Head of Kinslae, where she hit rocks in heavy fog on the 22nd June 1892. She was on route from from New York to Liverpool, via Qaeenstown. However while crossing Courtmacsherry Bay, unknown to the captain, the ship was much further north than intended and on a direct collision course with the cliffs of the Old Head of Kinsale. Had they throttled speed sooner and checked the depths there may have been some chance of saving the liner, but the City of Chicago ran aground on the rocks at Ringagurteen Point. There was no loss life with all on board making it up the rocky cliff face to safety.

Today the remains of the ship lay in close to the shore at the entrance to a small cave. She is well broken up and there are some very fine swim through’s in the wreckage which is now covered in marine life. It is also possible to collect golf balls a plenty on the dive hit there by frustrated golfers having a bad day on the Old Head Golf Course. The depth ranges from 5M to 20M and is suitable for all experience levels

The Sante (commonly known as Santo)  was a 128 ft 217 ton steam powered bucket dredger. Her maiden voyage was to be a trip from the west coast of Scotland to the Island of Formosa (now known as Taiwan) which was then part of Japanese territory. While on her way in December 1900 a gale forced the captain to head for Cork Harbour and on Christmas Day she sank, five of her crew were rescued form a life boat but the rest were drowned.

The wreck of the Santo now lies in 28M (depending on tide) to the south east of Roche’s Point, just outside Cork Harbour. The line of buckets can clearly be seen on the sea bed stretching away from a large wheel. There are large holes in her boiler and looking through there it is possible to inspect the many fish that have made this interesting wreck their home. The propeller and the anchor are also main focal points of the wreck. This is a highly recommended dive with lots to see and at a depth that allows the diver reasonable bottom time.

Without doubt the Aud is the most famous ship wreck in the Cork Harbour area; she was in fact a ship called the Libau. She was carrying a cargo of arms to Ireland, to aid the 1916 Easter rising. Masquerading as the Aud, an existing Norwegian vessel of similar appearance, she left the Baltic port of Lubeck on April 9th 1916, under the Command of the German Captain Karl Spindler. The Aud, was carrying an estimated 20,000 rifles, 1000,000 rounds of ammunition, 10 machine guns, and explosives.

The Aud now lies in 36M of water and is very broken up. There are a number of boilers to be seen along with thousands of bullets. It is a popular dive because of its historical significance. A couple of yeas ago tow of her anchors were raised and one is to go on display in Cobh Co Cork and the other in Fenit Co Kerry.

The Clifton was a 242 ton Steam fishing trawler, 126ft in length. She was built in 1906 by Cochrane and Sons, in Selby. After a career fishing the North Sea she was taken into service by the British Admiralty in 1915 and sent to Queenstown, now Cobh, in Cork Harbour.

The Clifton was sweeping at the entrance to Cork harbour for mines when there was a massive explosion was heard and the ship disappeared in seconds. She had struck one of the very mines being swept and with no watertight compartments and cemented bulkheads she would have sunk very quickly. There was only one survivor

The wreck lies in 38M and is a compact wreck dive. It now is home to a number of large conger and is constituently patrolled by Pouting

Constructed by Harland and Wolff and launched in 1901, this White Star liner Celtic was the largest ship built to that date.

The final voyage of the Celtic began on the First of December 1928 from Liverpool, via Cobh to Boston. By the time the Celtic reached Roche’s Point the weather was too bad to allow the ship to pick up a pilot, the Captain moved closer to the Harbour entrance but was taken onto the rocks at Roche’s Point when the tide receded the ship was stuck fast.

Over the next few days several salvage attempts were made, but finally by the 19th of December the White Star Line abandoned the Celtic to the ship breakers. By 1933 the ship had been fully dismantled, and many items of decor from the Celtic survive in houses around Co. Cork to this day. Large amounts of remains also litter the seabed around the Cow and Calf Rocks at Roche’s Point, providing enjoyable diving. Large sections can be found just south east of the Cow and Calf Rocks, in depths varying from 6M to about 18M.

The Morococala, was built by Alexander Hall and Co, Aberdeen, in 1915, for the Ross Steam Trawl Fishing Company Ltd. She was 264.5 tons of steel construction and length was 125ft.

The Morococala was taken up by the Admiralty in May 1915. She was assigned to Patrol area 21, that of the Queenstown Command, in Cork, she was armed with a 6lb Hotchkiss quick fire gun, and two type D depth charges.

On the 19 of November 1917 the Morococala hit a mine and sank none of the 13 crew survived the sinking.